The table below gives information about changes in modes of travel in Netherlands between 2001 and 2006. Describe the information in the table and make comparisons where appropriate. 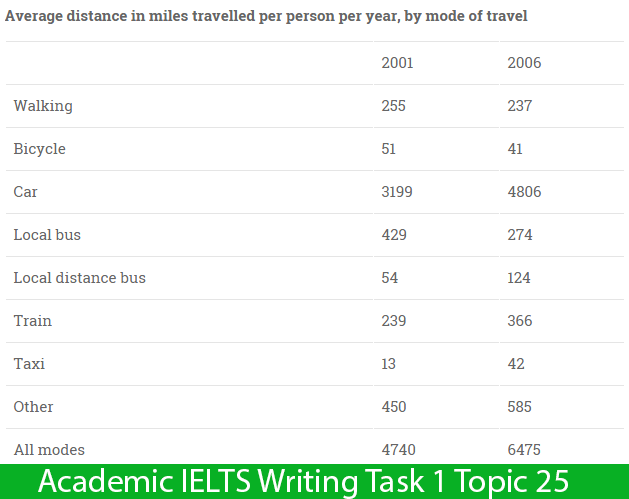 The chart illustrates average distance travelled by various modes of transport in Netherland in 2001 and 2006. The figures are given in miles and to show how people’s preference changed over time.

In general, people in Netherland travelled more in the year 2006 than in 2001. Cars showed unparalleled figures among the given categories. Except walking, using bicycles and taking local buses, most of the categories showed overall increases in the distance travelled.

In detail, a person driving his own car travelled 3,199 miles on average in 2001, and the average distance showed a moderate rise to 4,806 miles in 2006. Apart from cars, taking trains, using long distance buses and taxis also experienced an overall growth in their figures from 289 miles to 366, from 54 miles to 124, and from 13 miles to 42 respectively in the order named.

On the other hand, walking and rising bicycles were not more favored by Dutch people. Both categories showed a moderate decline in their figures. Meanwhile, the number of people who used local buses must have dropped significantly as the average distance experienced a dramatic fall from 429 miles in 2001 to 274 miles in 2006.