The graph shows the trends in consumption of fast foods in Britain.

Write a report for a university lecturer describing the information shown below.
» You should write at least 150 words.
Consumption of fast food per person in gram in Britain. 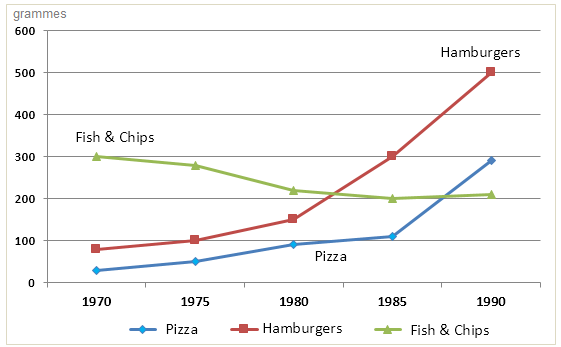 The provided line graph compares the changes in the trend of fast food consumption in Britain within a time span of 20 years i.e from 1970 to 1990. (introduction- writing the main idea from the question + burrowing the dates from the graph) – see how to write introduction
As is observed (starting with some phrase), more and more British people switch to Fish and chips, and Hamburger, however(connective word), Pizza becomes less favorite within the given period of time(this is to show your understanding of the trend not the graph, better not to write the consumption of pizza decreases and the consumption of Ham and  Fish increases).- see how to write overview
Diving deep(Phrase for body paragraph), in 1970 (write date either at the beginning of the sentence or at the last), Pizza is the most popular(superlative degree) instant food(lexical resource for fast food) where as(connective word), Hamburger is the least (superlative degree- it is suggested to write the appropriate antonyms, most-least, highest-lowest but not most-lowest) preferred at 300 gm/person and 30 gm/person consumption units respectively, clearly the consumption of Pizza is ten times higher than that of Hamburger(comparing how big?).
Further, for the next 15 years(paraphrasing a period up to 1985)  the consumption of Hamburger sees almost constant growth(using the noun form) in its lovers reaching around 100 units in 1985. Also(connective word to show similarity),  Pizza follows a similar pattern, but until 1980 only to rise by 70 units(this time explain the total change in number). Contrastingly(connective word to show dissimilarity), the popularity of Pizza decreases(using the verb form) each year.Commencing from 1980, Fish and chips, increases dramatically (explaining the nature of increment) to hit the highest in 1990 reaching 300 gm/person consumption. Following this, Hamburger becomes the second most opted food in the same year. However(connective word to show opposite trend), the most popular item of 1985 i.e. Pizza becomes the least popular with a fall in 100 units of consumption (comparing same item in different dates). It is noteworthy to find equal number of British peoples’ crave for Pizza and Fish, and Pizza and Hamburger in 1983 and 1986 respectively.